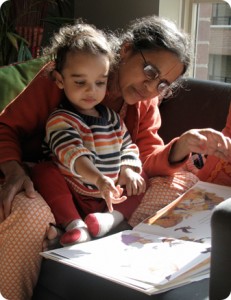 PALS is a culturally responsive, comprehensive family literacy program for parents and their four- and five-year-old children that I co-developed with Fiona Morrison, who was the Primary Consultant, Langley School District. The program is currently operating in about 25 school districts across British Columbia and interest in the program continues to grow as the number of schools, preschools/daycares, and communities implementing the program continues to expand. It has also been adopted by First Nations Communities in British Columbia and in  the North West Territories and is in place in schools in the Toronto Catholic School system, in Switzerland and Uganda.

To ensure that the program meets the needs of families and the community, parents and teachers were involved in conceptualizing the program and in identifying topics about which they wanted to learn more. PALS typically consists of 10 to 12, two and one-half hour sessions which occur approximately every two weeks. Topics include “Learning to Read”, “Learning the ABCs”, “Riddles, Raps and Rhymes”. Each session begins with participants and facilitators sharing a light breakfast or lunch. The topic of the session is then introduced and parents share their knowledge and insights. Then, parents proceed to the kindergarten (or preschool) classroom where they work with their children for about an hour on activities related to the topic of the day. Afterward while the children are at recess, parents are provided with an opportunity to discuss what they observed as they worked with the children. They are then provided with a high-quality children’s book and, on occasion, they make an educational game or activity to take home.

With colleagues,  I documented the implementation of a bilingual family literacy project, Parents As Literacy Supporters in Immigrant Communities, with more than 500 families from four linguistic groups – Farsi, Karen, Mandarin, and Punjabi – in five communities. The project was supported by 2010 Legacies Now,  the governments of British Columbia and Canada, and five school districts in the Greater Vancouver Area.

Literacy for Life is an intergenerational family literacy program that Dr. Victoria Purcell-Gates and I co-developed, based on the theory of literacy as situated social practice. The program incorporated real life or authentic literacy activities, as well as embedded skill and strategy instruction. In collaboration with local literacy organizations and social agencies and a local school district, the program was offered to immigrant and refugee families in two inner-city communities. The project was funded by an internal grant from the University of British Columbia Bookstore and the Canadian Council on Learning with in-kind contributions from the Britannia Community Center, Canucks Family Education Center, the Umoja Operation Compassion Society, and the Surrey School District.